They say keep your friends close but your enemies closer – the question is, after sharing a post-victory Ryder Cup hug, quite how do Bryson DeChambeau and Brooks Koepka now see each other?

The rivalry between the pair had built up over a couple of years with fans even getting involved in recent months by directing insults at DeChambeau in particular on the course.

However, the United States’ historic 19-9 Ryder Cup victory against Europe seems to have put an end to all that, at least briefly. Or has it?

DeChambeau and Koepka were encouraged to share a hug by their team-mate Justin Thomas as the Americans celebrated the win – having already embraced earlier on the course in the wake of the US’ huge victory.

“Before we go, let’s see Brooks and Bryson hug in the middle of the room,” 2017 US PGA champion Thomas said as the team faced the media.

Thomas, who whipped up the Whistling Straits crowd by downing a beer after winning his foursomes match on Saturday, then began singing ‘Why can’t we be friends?’ as the duo moved in for the big moment.

The hugs seemed a lot more genuine than the chat on the range between the two in the build-up to the Ryder Cup, with most agreeing it was awkward and had been orchestrated for the waiting cameras.

Reconciliation definitely did not seem on the cards before the matches started with US captain Steve Stricker saying it was unlikely they would be paired together at Whistling Straits.

But afterwards Stricker said “Brooks and Bryson wanted to play together – that’s how much this team came together” as he reflected on his side’s runaway triumph in Wisconsin.

Stricker decided not to pair them up, teaming DeChambeau with Scottie Scheffler in both fourball series and Koepka with Daniel Berger in two foursomes then with Jordan Spieth in Saturday’s fourballs.

So perhaps the US skipper isn’t totally convinced the duo are quite ready to become best buddies – after all, there is plenty of history to overcome…

How Koepka and DeChambeau’s feud unfolded

January 2019: The rivalry between Koepka and DeChambeau seemingly began with Koepka saying he didn’t “understand how it takes a minute and 20 seconds to hit a golf ball”. He added “it really drives me nuts” after watching video footage of DeChambeau going through some calculations before hitting a shot.

DeChambeau, who had bulked up significantly to help his efforts to hit the ball further, defended his approach and pointed out “the Rules of Golf allow for a certain amount of time, and we’re [using it] to our fullest potential”.

August 2019: Two days after going viral for taking three minutes to hit a 70-yard pitch shot, DeChambeau and Koepka spoke ‘face-to-face’ and the former said their simmering row had “got blown out of proportion”.

A podcast that focuses on the PGA Tour then asked who would win a theoretical heavyweight title bout. DeChambeau said: “We know who would win that fight and it’s not me.” A laughing Koepka said: “He’s got that right.”

July 2020: It all went quiet for a while during the early stages of the Covid-19 pandemic as golf was cancelled. DeChambeau unwittingly reignited the playground spat when asking for a free drop under a “dangerous situation” rule, believing his ball was near a fire ant’s nest. He was denied.

The following day Koepka was in a similar position and pointing to the ground said “look there’s an ant”, before saying “nah, just kidding”.

October 2020: DeChambeau wins his first major, the US Open. Koepka missed it through injury but when asked about it, he replied: “I didn’t watch a shot of it. I didn’t see anything.” And later that month on an Instagram Q&A he said he “chose not to” talk about DeChambeau, adding: “If you’ve got nothing nice to say, don’t say it at all.”

May 2021: Koepka appeared to be distracted and then openly annoyed by DeChambeau walking behind him in metal spikes in an unaired television interview that was then leaked at the US PGA.

On 26 May, Koepka posted a message on Twitter that read “Sorry bro @AaronRodgers12” after the NFL quarterback was paired with DeChambeau for ‘The Match’ against Phil Mickelson and another NFL quarterback Tom Brady.

DeChambeau responded by saying he was “living rent free” in Koepka’s head so his antagonist retweeted a video of a fan calling DeChambeau “Brooksie” during a practice round at the US PGA.

June 2021: Koepka tweeted a video message in which he thanked fans for their support at the Memorial Tournament despite him not playing.

A number of spectators were escorted from Muirfield Village for shouting “Brooksie” at DeChambeau.

Koepka reacted to the news by posting a video on social media offering to reimburse any spectator whose day was “cut short” with a free case of beer.

August 2021: After his play-off defeat by Patrick Cantlay in the BMW Championship, DeChambeau swore in response to a fan who mocked him by saying “great job, Brooksie”.

Hecklers were warned by PGA Tour commissioner Jay Monahan they could face expulsion from the course if they abused the players.

September 2021: The end? DeChambeau and Koepka share not one, but two hugs as they celebrate the United States’ Ryder Cup win against Europe. 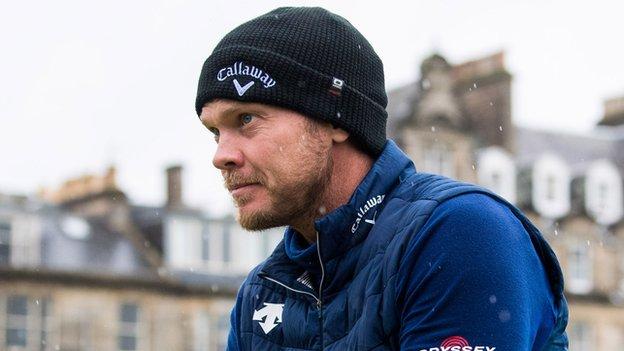 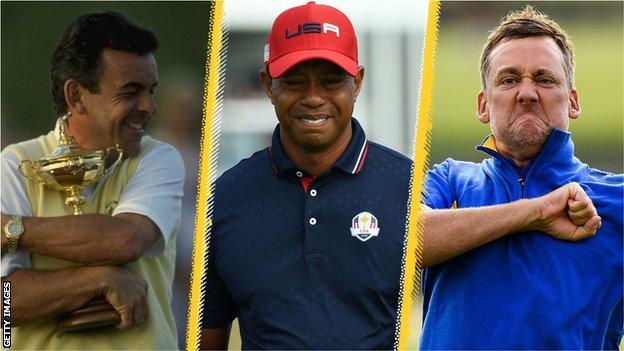